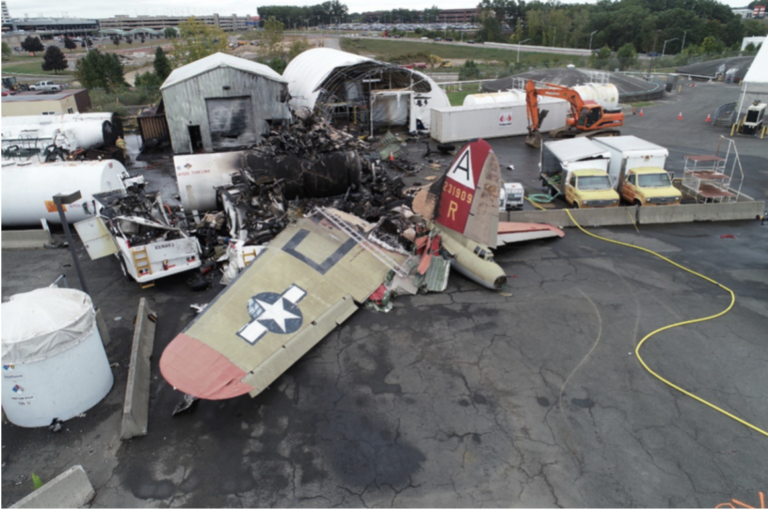 The National Transportation Safety Board detailed in an accident report issued April 13, 2019 the circumstances that led to the crash of a Boeing B-17G airplane that killed seven people and injured seven others. The NTSB determined the probable cause of the accident was the pilot’s failure to properly manage the airplane’s configuration and airspeed following a loss of engine power.

The Word War II-era Boeing B-17G airplane had just departed Bradley International Airport in Windsor Locks, Connecticut, Oct. 2, 2019, on a “living history flight experience” flight with 10 passengers when the pilot radioed controllers that the airplane was returning to the field because of an engine problem.  The airplane struck approach lights, contacted the ground before reaching the runway and collided with unoccupied airport vehicles; the majority of the fuselage was consumed by a post-crash fire.

“An NTSB airplane performance study showed the B-17 could likely have overflown the approach lights and landed on the runway had the pilot kept the landing gear retracted and accelerated to 120 mph until it was evident the airplane would reach the runway.”

Interesting, but what do we learn from this? Nothing is mentioned in the safety recommendations about in-flight performance management training. It is just another way of saying: pilot error. If he had done this then nothing would have happened. But where is the learning? How does stating this probable cause help in avoiding similar accidents from happening in the future? Hey, the pilot was the head of maintenance for this aeroplane. For sure, he didn’t wake up in the morning with the intention of crashing and taking 7 of his passenger’s lives.

Luckily the investigators also looked at systemic issues such as regulatory requirements (no need for SMS and less stringent requirements compared to other commercial operations) and maintenance issues. In your opinion: what else can be learned from this accident? Do you think it is necessary to have a probable cause in every accident investigation report?