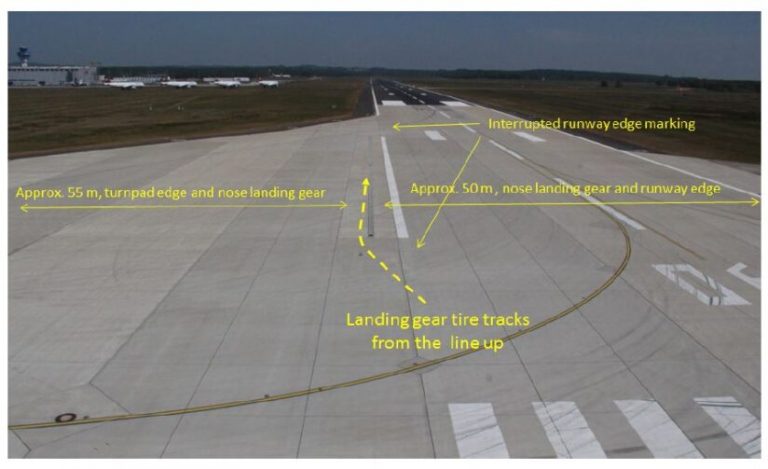 The very experienced crew of an ATR-72 takes off from Köln/Bonn airport on 27 April 2020 but instead of lining up with the middle of runway 06, they position the aircraft at the runway edge. During the take-off run, they notice various “blows to the aeroplane” caused by the runway edge lights hitting parts of the fuselage causing damage, the nose landing gear and the propellor blades. The aircraft travelled about 805 m (2,641 ft) and reached a groundspeed of 86kt before the takeoff was rejected and the aeroplane returned to the apron.

In the morning darkness, the pilots back-tracked the runway (i.e. they taxied on the runway in the opposite direction of take-off) to the end and made a 180° turn to line up for take-off. During the turn, the pilots heard a noise and initially thought that the cockpit door had opened, but the subsequently determined that the captain’s bag had fallen behind his seat. The captain completed the turn with the white lights in front of him. Both pilots were convinced they were correctly aligned with the runway centreline before they initiated the take-off. What made them believe they were on the right spot?

With regards to safety nets: