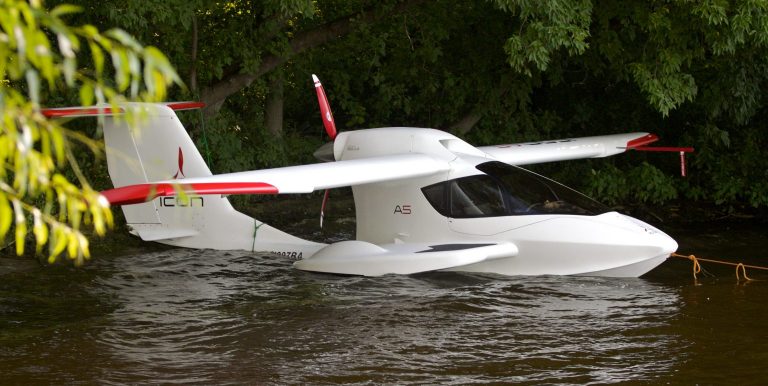 “From the US comes the latest domestic item to join the list of dangerous foreign object debris (FOD) items. A wireless audio speaker, used for listening to music on a smartphone is the prime suspect in the sinking of an Icon A5 amphibian aeroplane.

The private pilot told the US National Transportation Safety Board (NTSB) he had taxied downwind on the water for take-off near the Sky Harbor Airport, in Duluth, Minnesota. When facing into the wind, he had applied full power. About five seconds later he heard a loud bang.

He shut down the engine, climbed out of the cockpit, looked back and saw all three propeller blades were missing (the Icon A5 is a pusher aircraft). He also noticed the aircraft was sinking. The pilot and passenger donned life jackets and evacuated. They noted substantial damage to the fuselage, including holes in the hull. The pilot and passenger were not injured.

The pilot recalled that before he taxied out, he had washed the aircraft. During the wash, he had placed a portable speaker on the top of the aeroplane to listen to music while working. He did not recall putting the speaker away before departure. During a telephone conversation with the NTSB, the pilot said he had not seen the speaker since the accident. The pilot said, ‘the speaker must have rolled over the engine compartment and into the propellers … ’

The Icon A5 is an amphibious light-sport aircraft which first flew in 2014. The type has had several accidents, including two fatal crashes, all of which have been attributed to human error”